The Article of the Month of December – Sexuality: no taboos, just love – Drs. Hertoghe, Gerin, Poutet 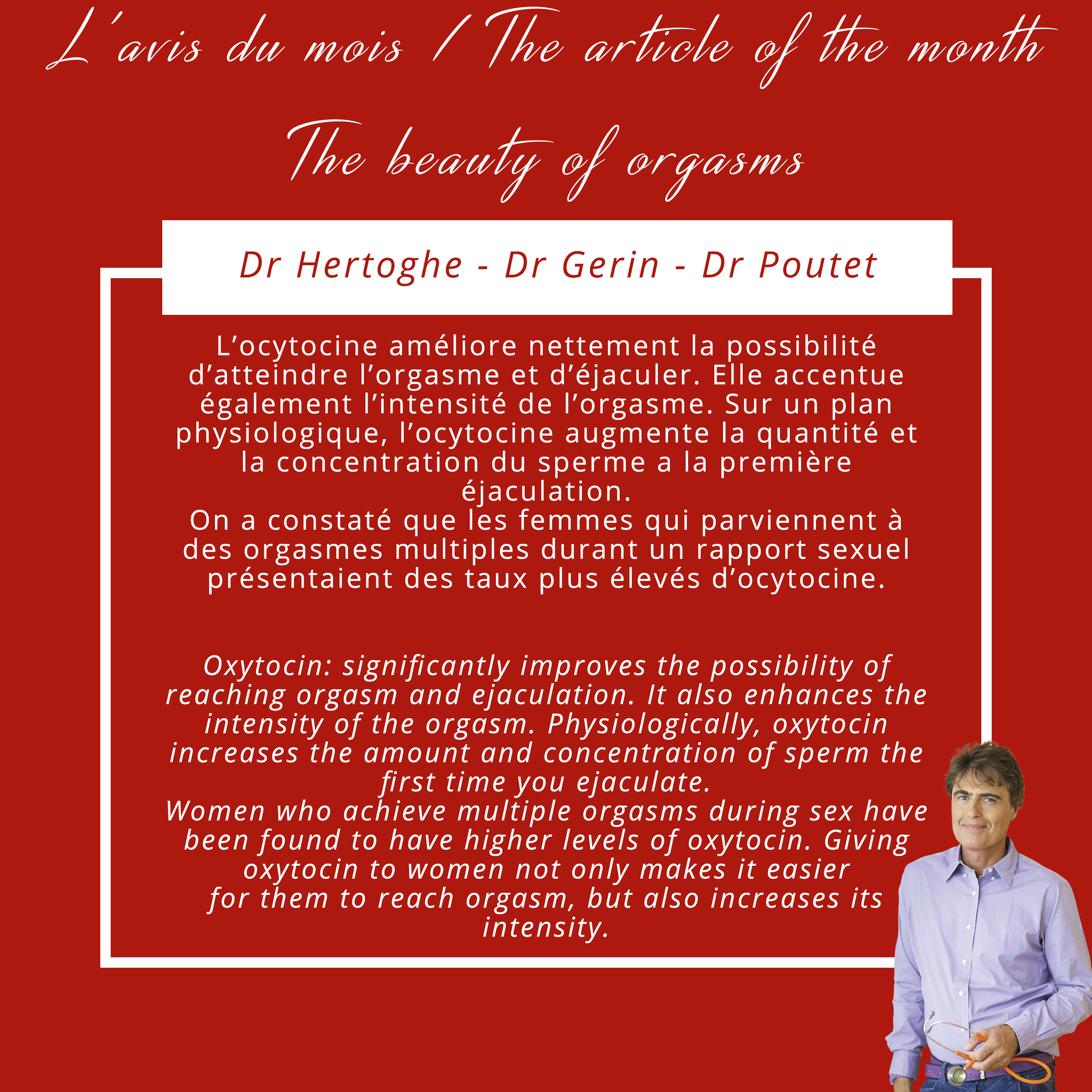 Last week we celebrated the “Global orgasm”, let me give you some key information on this beautiful feeling 😊

From a hormonal point of view, the first thing to do is to make sure that the sex hormones are at the correct level, including androstenedione glucuronide which provides information on DHT levels (important for the libido).

What are the hormones that can improve sexuality?

+ Oxytocin: significantly improves the possibility of reaching orgasm and ejaculation. It also enhances the intensity of the orgasm. Physiologically, oxytocin increases the amount and concentration of sperm the first time you ejaculate.

Women who achieve multiple orgasms during sex have been found to have higher levels of oxytocin. Giving oxytocin to women not only makes it easier for them to reach orgasm, but also increases its intensity. However, despite the powerful ability of oxytocin to stimulate orgasm, it may not be enough for women who lack of?? histamine, a stimulating neurotransmitter. Histamine is known primarily as the neurotransmitter that causes allergies, but it is also the neurotransmitter that triggers orgasm. It may be dangerous to give histamine to facilitate orgasms as this can trigger allergic reactions, but the amino acid histidine, precursor of histamine, doesn’t seem to cause allergies, while stimulating orgasms, provided you respect the right dosages and times.

Testosterone, the male hormone, is not the primary hormone for erection. MSH, melanocyte stimulating hormone, stimulates erectile function in most men more effectively than testosterone and even more than products like Viagra or Cialis, especially in the form of synthetic derivatives: melanotan II and bremelanotide, or PT-141.

+ DHEA: the hormone of sexual fantasy and satisfaction. DHEA stimulates a woman’s libido and the number and intensity of her sexual fantasies, while improving sexual satisfaction during intercourse, although this action is less powerful than the one of testosterone. DHEA does this by converting it to testosterone, the male hormone, and estradiol.

DHEA treatment can also reduce the effects of erectile dysfunction, by converting it to testosterone.

+ Female hormones: Estrogen alone can also increase the level of sexual desire, but to a lesser degree than testosterone. Estrogens only stimulate sexual desire if the testosterone level is high enough. Progesterone, on the other hand, soothes libido.

+ MSH: (Melatoxyte Stimulating Hormone) in the form of Melatonan II or bremelanotide by subcutaneous injection greatly increases sexuality in both women and men. MSH not only acts on the frequency, volume and consistency of erections, it also accentuates psychological effects such as sexual desire, arousal, the sensitivity of the skin being caressed sexually, love, the intensity of orgasms and attachment.