The Article of the month of June “Testosterone And The Prostate : A Myth Versus Scientific Evidences” Pr. Schulman 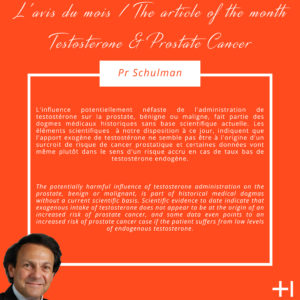 Androgens are vital for growth and maintenance of the prostate; however, the notion that pathologic prostate growth, benign or malignant, can be stimulated by androgens is a commonly held belief without scientific basis. The use of testosterone therapy in men with prostate cancer ( PCa )was previously contraindicated, although recent data challenge this axiom. Over the past 2 decades, there has been a dramatic paradigm shift in beliefs, attitude, and treatment of testosterone deficiency in men with prostate cancer.

A NOBEL PRIZE AT THE ORIGIN OF THE CONFUSION

The hormonal dependance of prostate cancer was demonstrated and the Nobel prize of medicine was attributed to Charles Huggins in 1966.

Today, androgen suppression remains the cornerstone of the treatment of advanced prostate cancer but the second assertion that testosterone could induce or make prostate cancer progress is not based on scientific evidence but on limited anecdotal cases.

A Medline search was conducted to identify all publications addressing the relationship between testosterone and the risk of PCa development, as well as the impact of Testosterone Treatment (TT) on PCa development and its natural history in men believed to be cured by surgery or radiation.

Evidence synthesis: Serum androgen levels, within a broad range, are not associated with PCa risk. Conversely, at time of PCa diagnosis, low rather than high serum testosterone levels have been found to be associated with advanced or high-grade disease.

The available evidence indicates that TT neither increases the risk of PCa diagnosis nor affects the natural history of PCa in men who have undergone definitive treatment without residual disease. These findings can be explained with the saturation model which states that prostatic homeostasis is maintained by a relatively low level of androgenic stimulation and with the observation that exogenous testosterone administration does not significantly increase intraprostatic androgen levels in hypogonadal men.

Men who received testosterone therapy after treatment for localized prostate cancer do not appear to suffer higher rates of recurrence or worse outcomes.

It must, however, be recognized that the literature remains limited regarding the effect of TT on PCa risk. Nonetheless, the current European Association of Urology (EAU) guidelines state that in hypogonadal men who were successfully treated for PCa, TT can be considered after a prudent interval.

An improved understanding of the negative effects of testosterone deficiency on health and health-related quality of life—and the ability of testosterone therapy to mitigate these effects has triggered a re-evaluation of the role testosterone plays in prostate cancer.

Although no large controlled studies have yet been performed and there is a paucity of long-term data, the available literature strongly suggests that TT- does not increases the risk of PCa diagnosis in normal men . An important paradigm shift has occurred within the field, in which testosterone therapy may now be regarded as a viable option for selected men who were successfully treated for PCa

Summary of  article with all references