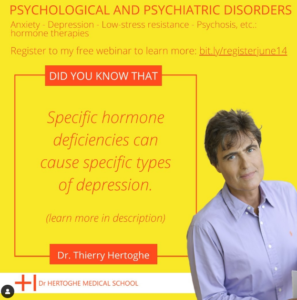 The high incidence of #depression can be caused by current life difficulties such as; #stresss and pollutants.

Which hormone for which kind of depression?

| #Thyroid hormone treats depressive states that are most pronounced in the morning upon awakening (morning depression), and greatly decrease or disappear as soon as the patient gets out of bed. But come back when resting, sitting, or lying in the same position.

When a patient with #hypothyroidism moves, he/she feels better due to a greater blood and oxygen supply to the brain.

| Estrogen-deficient depression is accompanied by a permanently low mood.
+ Low mood to moderate depression
+ No enthusiasm, no excitement
+ Loss of #feminity
+ No interest and not much energy to do things

| #Testosteronedeficiency is a typical depression in men. It’s linked to important low mood during the day:
+ Irritable, grumpy
+ Rigid thinking
+ Clear lack of courage to do things and confront conflictual situations
+ Hesitation and a lot of worries
+ Loss of masculine behavior

| Cortisol deficiency is linked to occasional mild to severe depressive feelings in stressful conditions. It generally leads to negative thoughts, depreciation and tends to overreact to stressful events (anger and anxiety outbursts)

| DHEA deficiency is accompanied by a typical depression characterized by permanent mild depressive feelings, the patients are less joyful and more cold-hearted.